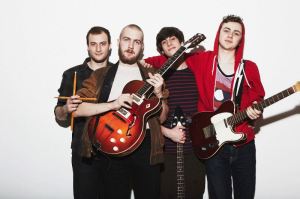 The Bodyshakes came across my digital desk just a couple days ago. Their latest EP, Rrraah, caught my attention quickly with the strong guitar/drum intro to “Save Yourself.” What clicks in my head not long after is that these four Montreal kids have an interesting sound. They have a blues vibe with a garage rock sound and the vocals, and I mean this in the best way possible, sound like a British dude trying to sound American. No wonder their live show is described as “a level of intensity worth of a Sex Pistols concert.” I especially like the call-and-response in the chorus, as it only drives my point home further. It’s always important for a rock band to start any album or EP in the strongest way possible, and The Bodyshakes definitely do.

The call-and-response continues in “Buoyfriend” but this time not with the vocal chorus, but rather the opening riff which works itself into all the right places, including the looped playlist in my head. The next song gives me a chance to catch my breath after rocking out too hard (because of course I rock out hard to music that makes me want to rock out hard). “Lonesome Lullabye” has a very soothing guitar riff, and nice beat to go with the vocals. The build up about 40 seconds in is really just a tease, which is nice because I’m still catching my breath, but it’s hard not to notice that the tiny surge of energy has lingered in a bit more of a noticeable drum beat leading to an even build up around 1:30 which brings out the sound we’re now expecting from this band based on their other songs, but quickly returns to the soothing lullaby. It’s a garage rock lullaby full of aggression. The title is perfect, the song is wonderful, but not quite a song I’d be able to sleep through.

The EP finishes with “Aye Aye Aye” and its reprise filled with catchy riffs and striking vocals. I’m not quite sure why “Aye Aye Aye” needed a reprise as a separate track, and not simply make it part of the original, but if you’re not paying attention to the track listing when you’re listening, it sounds just fine. The energy from this EP is contagious. This is a band I would definitely go see if I had the opportunity.

You can follow these boys on various forms of social media and get both their new EP, Rrraah, and their first EP, All Unquiet Things, check them out below: