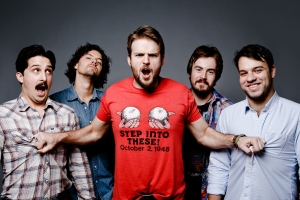 One such band, and one of the topics for this week is Poor Young Things. Five high school friends from Thunder Bay, Ontario who, in late 2010, took a risk and moved 16 hours away to the big city of Toronto in order to have a better chance at being heard. For the moment, it’s seemed to have worked out. They’re signed to Bumstead Productions and 3 years later, they’re all still living together in a house, and seemed to have adjusted well to big city living. Obviously it was a little tough at first, they learned a lot of new things, for example, guitarist Mike Kondakow learned the hard way that you need to call someone to get the gas turned on, and that just flipping the switch like they did back home, doesn’t always work, something he claims he might’ve been the only one who didn’t know.

The band just released their first full length album: The Heart. The Head. The End. (that you can hear by clicking the cover art below), and what a debut! 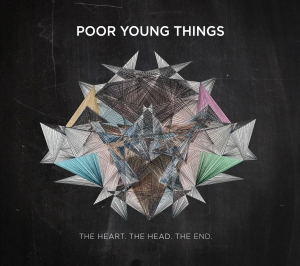 The album starts off upbeat and with a bang. Opening with “Dress It Up” and the first single from the album, “Sign of the Times,” which, along with the third track “Transformer” all feature additional vocals from members of label-mate, Tim Chaisson‘s touring band, Nat Lamoureux and Koady Chaisson.

Much like the album, the band’s live performance consists of high energy rock and roll music, and onstage chemistry that can really only come from 5 guys who live together on, and off the road, and who have known each other a long time. They have fun onstage, even knocking lead singer Matt Fratpietro, from a kneeling/crouching position at the end of a song, onto his ass, and then of course helping him back up. Or getting the entire crowd to sing “Happy Birthday” to bassist, Scott Burke, who’s birthday is actually today, Monday May 27th. It’s his champagne birthday, as people call it, 27 on the 27th – Happy Birthday, Scott. The camaraderie is something you expect exists in every band, but don’t always see, so when you find a band that you do see it in, it’s always special.

The middle of the album has a strong showing from supremely catchy tunes, “Revolver,” a tune that sounds like it should be on the Beatles‘ album of the same name and “Black Lightning,” which sounds like the building of a thunderstorm, the kind of song that makes me think of those late nights I’d stay up watching a storm when it was pitch black outside.

PYT’s first release an EP called Let It Sleep, taken from the title of the last track, was written shortly after moving to Toronto, and features songs about what it’s like to be in a new place, and adjusting to the big city. I was told the band has lived in three different houses since moving to Toronto, and each time they move, they write new music. The first house brought about the EP, and the next two brought about the songs from the new album, which you can tell was written by a band who are no longer writing about living in a new place, but rather a well adjusted group who are home and writing about experiences of settled and growing musicians. Want to know when new music is coming out? Their address is posted somewhere on their twitter, go watch their house….Okay. I’m kidding, don’t do that, they’ll hate me, plus they’re on tour anyways and likely will be on tour for well past the summer in support of their brand-spankin’-new album, so you won’t catch them anyways.

Before their show at the Horseshoe Tavern last Saturday, I was fortunate enough to sit down and talk with Matt about their experiences, music videos, covers, the band, its future, and everything we could cover to create an auditory snapshot of Poor Young Things. Check that out below, as well as some of the music videos we talk about below that.

Here is the cover of the Traveling Wilbury’s (Bob Dylan, George Harrison, Roy Orbison, Tom Petty and Jeff Lynn) Handle with Care by Poor Young Things (minus Konrad, who must’ve been filming) and Tim and Koady Chaisson.

I don’t want to over-saturate you with videos, but here’s a cover of “The Weight” by the Band and below you’ll find two music videos by Last Frame Pictures.

One response to “Poor Young Things: Poor in Money; Rich in Sound and Heart”