What happens when you take 4 members from 4 different Canadian alt-rock/90s grunge/post-grunge bands and throw them together in 2013 (well 2008 actually, but who’s counting), and have them make music together? Well you get Crash Karma. 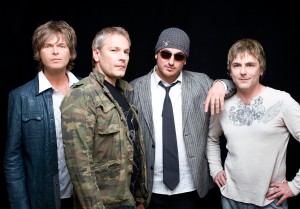 These are bands I grew up listening to, but never really appreciated because I was too young. Bands my brother liked. Edwin (lead vocals), comes from a little band called I Mother Earth, you may have heard of them. Remember The Tea Party? Their drummer Jeff Burrows, plays drums in CK. Zygote’s bass player, Amir Epstein, is the main songwriter of Crash Karma, and in fact brought the band together, and of course, on guitar, from the band that forever changed my life, Mike Turner, the original guitar player of Our Lady Peace, who was part of Naveed, Clumsy, Happiness, Spiritual Machines, and even a large chunk of Gravity.

What grabs me about this band, and was reinforced by their performance at their CD Release party at the Hard Rock Café at Yonge and Dundas Square in downtown Toronto last Tuesday, is how strong a case they make for the revival of 90s grunge/alt-rock. The title of their sophomoric album: Rock Musique Deluxe is a commentary on the fact that there are a lot of bands nowadays calling themselves rock bands but aren’t actually living up to the genre. They wanted to remind people that this is in fact a real rock album.

The album starts strong with “Appetite for Life.” It’s not a heavy track, music-wise. It almost seems like a retrospective, announcing that this band isn’t a young band, and that the days of singing late into the night, and fucking around, have gone. These are guys with families, who have toured extensively and are approaching music from a different direction.

“Man on Trial” was the first song the album to really stick with me. The furious drums, spiraling guitar, steady bass and Edwin’s vocals all tie in perfectly.

“Leave Her Alone” is a quick, heavy, punchy song, that grabs your attention midway through the album, which seems to be talking about physical abuse, which isn’t a light subject, but a lot of this album seems to be about heavier content. But you know what? That’s really okay. It’s the right genre, and it’s the right guys. This album is exactly as it should be, and if you know what you want from it, it’ll give you exactly that.

Watch the lyric video for the single, “Tomorrow” below.

One response to “Crash Karma”