Sometimes we get submissions of reviews from our friends or families. People who don’t have the time to write regularly, but they’ve come across an album or an artist that they need to share their opinion on. So here’s a guest post, from my good friend Sheldon.

Every once in a while, you come across something truly unique: The Theory of Everything, the second album from duo Pete Murray and Neil Godfrey under the moniker Life On Planet 9, is just that. Its rock and electronic mix makes it melodic, hard, soft, and ambient, all at the same time.

Murray and Godfrey have been making music for almost 20 years now – first as part of the nu-metal group Ultraspank, followed up by three albums with melodic hard rock outfit Lo-Pro. I started following their musical journeys about 5 years ago, when Lo-Pro’s sophomore album, The Beautiful Sounds of Revenge, helped me through a very painful time. Lo-Pro’s most recent album, Disintegration Effect, was released in 2013.

Life On Planet 9 released their debut album Bittersweet as an acoustic album written by all the members of Lo-Pro in 2011, but The Theory of Everything was written solely by Murray and Godfrey.

The Theory of Everything combines walls of guitars, soaring vocals, electronic textures, the occasional scream, and at several points, danceable beats. Pete Murray is aware of the power of his voice, and uses it not only to deliver lyrics, but as an instrument all on its own, much like Jared Leto with Thirty Seconds To Mars. Godfrey is a heavy hitter with his guitars, but knows when to take it down a notch as well. 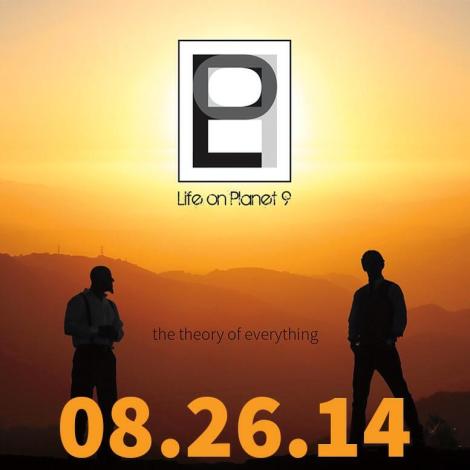 The album boasts incredibly melodic songs, like the harmony-heavy opener Everything and the powerful balladry of Now. Head banging crosses over seamlessly into deep grooves with the beats of Ordinary and Tonight. There are also songs that create clear pictures in the listener’s head. For me, The Sky creates a vivid image of a rainy grey coastal evening. There are also a few leaps into uncharted territory, as with the first single off of the album, Rainy Days, which drifts into psychedelics, with Murray using (possibly) the full range of his voice over phased guitars. Closer The Stars is ethereally textured, a gentle goodbye, and hopefully not for long.

It’s clear that these guys have a gift – I’m grateful they’ve continued to share it with the world. I can almost guarantee you’ve never heard anything like this before.

Listen to What Would You Say here:

Buy The Theory of Everything on iTunes or CDBaby