Two tidbits of info for you: The music of Wounds does have graphic language and subject matter. It is not for everyone. Also, all pictures of the band from Riot Fest Toronto used in this post are my own.

Ireland is known mostly for it’s traditional Celtic music and some rock bands here and there, such as U2, The Cranberries and My Bloody Valentine. Not usually punk rock until recently, with the emergence of Dublin noise-punkers Wounds

The band has been around for a while in their home country, but have really started to expand into North America this year, with appearing at different music festivals, such as Riot Fest, and will be touring with H.I.M. and Motionless in White this December. AND to top this breakout year, the guys are re-releasing their debut album, Die Young, around the world on Monday, November 24 with a few new track added.

The album cover is quite graphic, showing the scarred torso of lead guitarist James Coogan, who almost died from a freak accident a few years ago when he fell from a fourth-storey balcony, leaving him on life-support for three months. He has since then fully recovered, except for the scar on his abdomen and being blind in his right eye, which is why he wears sunglasses most of the time. 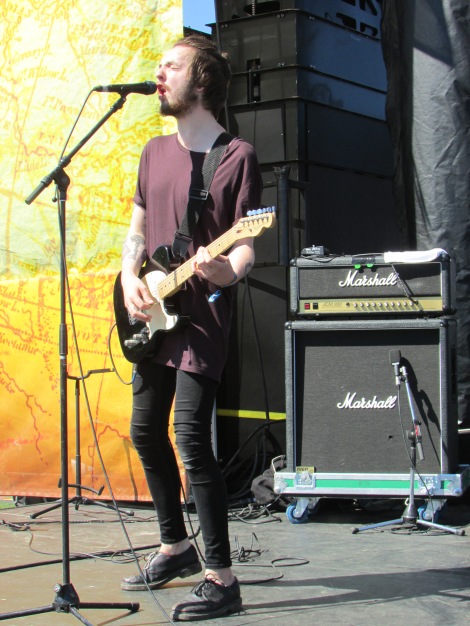 The album starts off with “War In The Sun”, which is a smooth, simmering track highlighting the singing qualities of lead singer Aidan Coogan, Jame’s brother, while also displaying the overall abilities of the band, with Craig McCann on drums and Steve Lucarelli on bass. “Killing Spree”, the original opening track, starts with a muffled recording of the band performing and instantly jumps into a higher quality rock song, giving the listener a feel of what the overall album is going to be like. The dark subject matter of the song, with Aidan screaming “Who can tie this noose around, and all of you can watch me while I die. Slip the knife into your neck, I’ll drink your blood, I’ll drink your sweat.” also tries to prepare the listener for what is to come over the next 40 minutes. 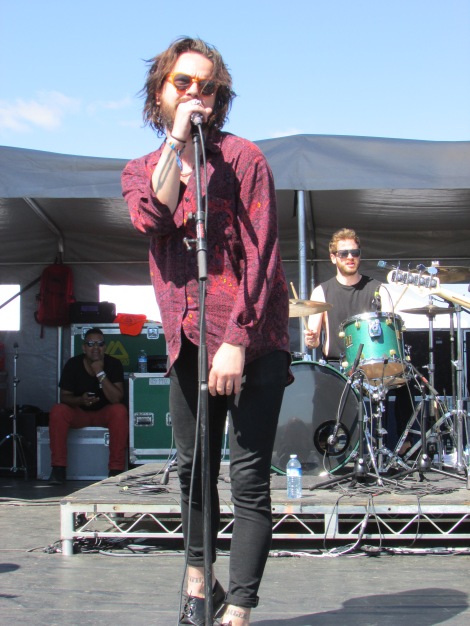 There is a feeling of anger and pain throughout the album and needing to suppress it anyway possible, including alcohol. Aidan, with the others singing backup, yell in “Trouble For The Sake Of It”, “We get up, we go out, we get fucked! We drink this poison, it’s in our veins. We hear your voice, we’ll say never again!”. This is also reflected throughout the songs “Dead Dead Fucking Dead” and “No Future”, which are pretty much about using alcohol and drugs to sedate the pain of everyday life and loss. Both songs are great examples of the coherence of the band as a whole, with each part blending together great.

This is the original video for “No Future” released a few years ago in Ireland.

The following track, “Choke” has a very strong, booming bass line throughout the song by Steve, accompanied by Aidan alternating between speak-singing the verses and bridge and screaming the choruses. The conversation feel of this song is also used in the later track “Binge”. “Bombs” also has the same vocal structure as “Choke” with a more upbeat feel, plowed ahead by Craig on the drums.

The next two songs, “Desperate Times” and “The Pile” are two heavy mosh-anthems, about the state of the world and the band/listeners defying the system. There are alot of harmony singing from the entire band to reinforce the ideas, with very hard-hitting, raw drums and guitar punching it home.

My personal favourite song from the album is “Binge”. You definitely get the feeling of hopelessness in Aidan’s voice, with one of the first lines being “I’m so drunk, I might black out again. It’s been a long night, and it shows. Desperation never looked so good. I’m rotting inside, nothing but cunt I don’t even know” The protagonist is obviously heavily intoxicated and coming down from a binge, doing things that he will regret, such as “I’m not sure if it’s me talking or the drugs, but I think I love you. Now what’s your name? Spill my guts to a stranger at a bar, can’t even stand straight and I’m fucking broke.” The backup vocals repeat the title of a earlier song, “Dead Dead Fucking Dead” during the pre-chorus, when Aidan sings “I want to tell you all about my dreams, but I don’t have none anymore. I want to tell you all about my friends, but I don’t have none anymore. Didn’t I tell you they were dead?” The rawness and dark feeling of this song is reflective of Queens of the Stone Age, who is a huge influence on Aidan (He has the pitchfork from Songs For The Deaf on his arm).

The last song on the original release, “Dead Road” has a pretty big guest; Ian D’Sa of Billy Talent. He accompanies Wounds with vocals and guitar. It is a representation of the end of a guy’s rope, asking “What can I do when I can’t live with myself?!?”

The new songs added at the end of the album are greatly influenced by the touring around North American recently. “This is What We Get” is more angry than hopeless, with the music sounding alot like Red Jumpsuit Apparatus, but a hell of alot more talented. Aidan’s voice sounds really powerful in this song, and everyone’s playing is on full display for good reason. “All Hell’s A Coming” is very alternative-punk sound, driven by drums and guitar, similar to more recent AFI. The band feels alot bigger and intimidating in these last two songs, making you forget that this is their first LP.

Die Young is released this week on Razor & Tie records, and Wounds are touring the US for the rest of 2014. I highly recommend seeing them live.

To commemorate the release of the album, I will be posting my interview that I had with Aidan and James Coogan earlier this fall at Riot Fest Toronto, on Tuesday.

Until next time, rock on.