Electro-pop has a great new addition from Byron Bay, Australia and that is TORA. This five-piece group of friends and step-brothers (Tobias Tsounis, Jo Loewenthal, Jai Piccone, Thorne Davis, & Shaun Johnston) bring together rock, techno-beats and harmonious vocals to create a sound not really heard before.  You definitely get an Alt-J feel and execution from some of the songs on their EP Eat The Sun, but there’s an aspect that makes TORA stand out.

The EP Eat The Sun has a great mix of rock, chillwave and R&B elements that are blended exquisitely. The main single, “Jaigantic” has jingling bells and synths, that compliment Jo’s voice. My personal favourite track, “Surround” is a haunting masterpiece that pulls from influences like James Blake and FKA Twigs. The EP has an ambient quality to the songs that feel distant, while being extremely personal and captivating. 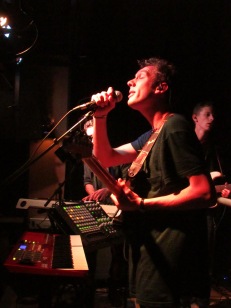 These pics are from TORA’s set at the Burdock on May 6th. A few days later, I was able to interview them at The Aussie BBQ.

How are you enjoying CMW so far?

Jo: It’s interesting playing shows with such a short time to change over cause we got such an elaborate set up.

Yeah you guys were rushing at the Burdock show.

Tobias: that one was pretty intense too.  My cable decided not to work so we had to restart everything.  So we cut a song short.

What are your major musical influences?

Jo: James Black, Little Dragon, who else? I think that’s it.

Jo: I think John Mayer a bit, with the guitar playing. Myself, I’m pretty influenced by Mayer.

How did you guys all meet to make the band?

Jo: yeah and we’ve just been mates for years and we decided to play music.  As a way to get chicks back in Year 7, then more stuff happened and we started to take it more seriously.  Then we started TORA 3 years ago and started producing music, a bit more electronic and that’s when we actually formed as a band together.

What does the next year look like for the band?

Jo: Pretty intense.  Got lots of gigs all over the place, like going to Berlin on (May 10th).  We go to the Berghiem, then to the next place then the nest one, then Paris, London, back to Germany.  All over the place but it should be good fun.  It’s tiring but it’s a good time.  Couldn’t think of four better guys to go with.

Thorne: Well actually five with our manager Pat over here points to him he’s part of the band.

Jo: Yeah, he looks out for us.  Makes sure we actually get up and make it to the show.

Over in Germany, the band’s bags were stolen from their van, so they no longer have passports or cash.  The tour has been rearranged and make up shows for London have been scheduled for later on in June.  Hopefully the rest of the tour goes without anymore problems.