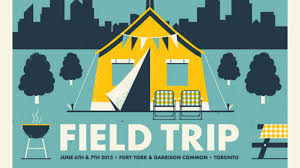 It’s already that time of year again folks, Field Trip festival is this weekend.  This is the third installment of the Arts & Crafts Records festival at Fort York, and this year’s line-up doesn’t disappoint.  Here are our choices of who to see on Saturday, June 6th.

Self-proclaimed artists of “cool-ass jazz”, The Wayo are a four piece from Toronto that transform whatever venue or room you see them in or listen to them in, into a smoky club late at night.  Charlotte’s voice is soothing yet powerful, and when accompanied by the rest of the band on guitar, bass and drums, the full sound is flawless and after seeing them at CMW last month, I want more.

Continuing with the jazz sound, Andy Shauf brings in elements of singer-songwriter and folk that brings depth and a sense of mystery to the songs he expertly performs.  The delivery is similar to Hozier and James Bay, with a feeling of an accompanying emptiness, like an instrument is missing.

Lose yourself in his performance at the Fort York stage at 2:15

One of the original Arts & Crafts artists, Apostle of Hustle is an indie rock group formed by Broken Social Scene guitarist Andrew Whiteman (also one half of ARoarA).  This will be the third year that Whiteman has performed here, but the first time as Apostle of Hustle, which is a blend of Spanish and Cuban traditional music with rock and folk.  The set they will be performing is similar to BSS’ set in 2013; they will be performing the entirety of their debut record, Folkloric Feel.

Here’s the title track from the album:

Get into that folkloric feel with Apostle of Hustle at the Fort York stage at 5:30

The War On Drugs

The past year has been big for Philadelphia rockers The War On Drugs, with their hugely successful record Lost In The Dream.  Their brand of shoegaze and post-punk brings to mind the National and the solo career of ex-band member Kurt Vile.  They are a good band to get the crowd up and moving, ready for Arkells and Alabama Shakes.

They will be rocking the Garrison stage at 6:30.

This electronic duo closes the Fort York stage for the night with their atmospheric electronica.  Megan’s falsetto voice is beautifully accompanied by Corin’s dance beats and drums, even when syncopation occurs.  Their stage set up is fantastic and will have everyone transfixed for their whole set.

They take everyone to another planet starting at 9:00