It’s been a few years since Syracuse, New York based baroque pop band Ra Ra Riot has released any new music.  Luckily for us, they have been busy in the studio and put together a solid slice of summer, in the form of Need Your Light, released today on Barsuk Records and Arts & Crafts in Canada.  The album is upbeat, and a well-crafted middle-of-the-road blend of their past few albums, pulling the baroque feel of The Rhumb Line with the more melodic rock of The Orchard and the catchy dance beats of Beta Love. There is also the influence of producer Rostam Batmanglij, former member of Vampire Weekend.

The album starts with the jangly “Water”, co-written and performed with Rostam.  This track shows off the range of singer Wes Miles’ voice, going from low alto, with almost talking during the verses, to the falsetto chorus, when he belts out “So I crawled out of the back door, I took of all these tight clothes, jumped into the water.” It is a great blend of the synth-driven Vampire Weekend songs that Rostam had written and composed, such as “Diplomat’s Son”, with the groove rock Ra Ra riot is known for.

Right away, the more pop inspired “Absolutely” starts up, not letting the listener take a breather.  This is probably on of the most upbeat tracks by Ra Ra Riot, having a bubbly feel to it with great guitar and bass lines by Milo Bonacci and Mathieu Santos.  Each member of the band is showcased, such as Rebecca Zeller’s violin is prominent in the bridge and Kenny Bernard’s drums carry the song throughout.

The next song is pure Ra Ra Riot; “Foreign Lovers” is a upbeat dance rock anthem carried heavily on Kenny’s expertise.  Another aspect that comes out very strong is the detailed bass line by Mathieu.  It’s just a short and fun track, that will cause the listener to dance in their seat. 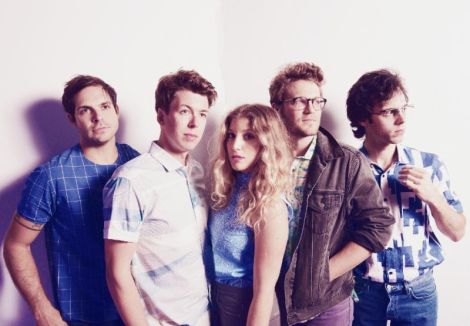 The following song, “I Need Your Light” is a slow building song, with softer vocals in the verses, similar to “Water”, with forceful choruses.  The major component to this track is the consistent fast drum beat, moving the song along to the more subdued bridge, with just Wes and Rebecca performing.  It builds back up to the fuller sound with each member coming in incrementally.  This track is also produced by Rostam.

“Bad Times” is the next track, keeping the dance sound front and center, being driven by Milo’s guitar and an amazing violin part by Rebecca. even though the subject matter is more dark in this song, singing about a break-up, Ra Ra Riot keep the energy up.

Pulling more from their first album The Rhumb Line, the song “Call Me Out” doesn’t have too much production done on it, focusing on each band member’s skills as musicians.  Wes’ voice is strong and center-stage with this song, beautifully accompanied by steady violin and guitar lines.

Jumping into Beta Love, “Instant Breakup” have more of a dance feel, with quick delivery of lines and fast synth and drums throughout.  Even though the drums and synths keep the song upbeat, the more melodic violin reflects the sadness of the lyrics, about a relationship on it’s last legs. 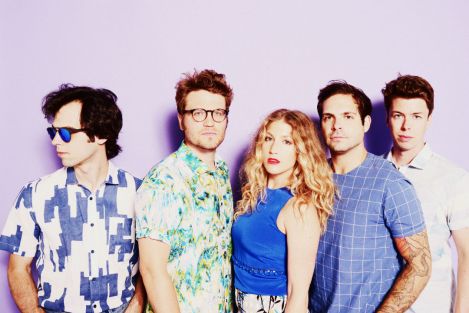 The quick paced tracks continue with “Every Time I’m Ready To Hug”, carried by the drums and bass.  This is a fun, bubbly track that creates a lightheartedness continued into “Bouncy Castle”.  The name fits well with a bouncy chorus, framed by intricate verses of guitar, synth and violin.  Effects are also used to echo Wes’ vocals.

The album closes out with “Suckers”, which is a bit of a comedown from the more dance pop sound of the album.  This track is closer to one found on The Orchard, with a more equal bland of instruments, bringing the strings more to the forefront throughout.  The distortion on the guitar adds a cool feel of disruption in the choruses.

This album is a great escape from the winter blahs we all are in the middle of, and gets us pumped for summer.  Ra Ra Riot will be going on tour across North America starting March 2, with stops on  March 31 in Vancouver, April 14 in Toronto and April 15 in Montreal.  If you don`t catch them then, you can always see them at Field Trip Arts and Music Festival in Toronto on June 4 & 5.