Two days down and two longer days to go for Ottawa CityFolk 2016, and it has been quite a festival so far. In just a couple of evenings, I have seen some old favourites, some wonderful surprises, and one absolute revelation. As  a quick aside, I’m very impressed with the modification that CityFolk has made to the festival grounds. Making one large space which include the main stage area, the horticulture building and a great little stage in the Aberdeen Pavillion has made the festival feel more free and open, while giving us another stage to choose from. I’ll do a quick recap of the first two days of CityFolk here followed by a preview of a few artists to look for on today.

What a way to start a folk festival! I arrived bright and early to hear the Dropkick Murphys kick off CityFolk with a Celtic bang. Sky-high rock energy with a healthy dose of Ireland folk really set us off with excitement.

After stopping by for a couple indie pop tunes from Lost Cousins, including an infectious cover of “Everybody Wants to Rule the World”, I returned to the main stage to get to a set that I feel perfectly represents what CityFolk should be. The Acorn is a local Ottawa indie folk band, allowing CityFolk to not only offer a beautifully peaceful set, but also to showcase what Ottawa has to offer. The Acorn was a soulful, passionate, and diverse set that made me feel right at home in the heart of Ottawa.

The Acorn playing at Ottawa CityFolk 2016

After a brief blues stint with another Ottawa crew, The Ramblin’ Valley Band, I decided to try the Ravenlaw stage for a dose of Blind Pilot. A set of slow, deeply layered indie folk tracks were the backdrop for Israel Nebeker’s sweet, emotion-laden voice. I certainly enjoyed this set, but it didn’t stand out as something particularly out of the ordinary.

I wish I had a little more time for Skinny Lister, because the few songs I caught from them were an immensely fun, foot-stomping display of British folk. The energy emanating from this dynamic band as the double-bass player swung and hoisted his massive instrument just made me smile from beginning to end. Unfortunately for them, Plants and Animals was up next, and I wasn’t about to miss a second of their set. 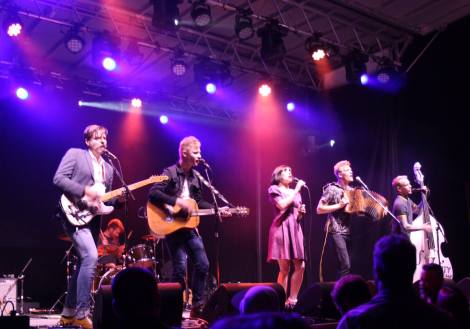 Skinny Lister performs at the BMO Stage during Ottawa CityFolk 2016

For the sake of brevity, I’ll point you in the direction of the last time I saw Plants and Animals. These guys are the complete package. Powerful, emotional, intricate, fun, and exceptionally unique are all perfect descriptors for this Montreal outfit. After this set ‘i figured I had already seen the best set of the festival. Little did I know what Friday had in store.

After Thursday night I was jonesing for another round, and I got right into it with a rousing set from John Jacob Magistery. Putting the music from their debut album on full display, this set was made up of tightly composed indie rock songs with multiple connected segments with a few folk-oriented tunes sprinkled in. It was a fine start.

I managed to catch the last half of Old Man Grant, a folk trio crowded around a single microphone, delivering tight, soaring harmonies on top of deft acoustic guitar strumming and a thumping double-bass. I’ll be looking into this band a little more in the future.

I had meant to hear the last half of Joey Bada$$$, but apparently the guy didn’t realize he had a full hour and called his set early after playing the same song twice. A little disappointed, I prepared for the next slot, which I planned on splitting between a tribute to The Band and the April Verch Band. The tribute to The Band was enjoyable, and I love the songs that they were playing, but in the end a cover band is a cover band, and I wasn’t getting much out of them that I don’t get from watching The Last Waltz, so to the April Verch Band I went.

The April Verch Band delighted their audience with sweet, classic country-folk and bluegrass songs played with precision. April Verch wowed me with her fiddle playing and tap-dancing, which is a rare treat for me. Combine that with an exceptional bluegrass guitarist and bass/banjo player. Good stuff.

Finally, I readied myself for Guided by Voices. I was prepared for a great show, but this…I’m still reeling from their set. More on this later, once I have time to properly process it, but that scratched a punk itch in a way I have never felt before. If there is another set of this festival that tops Guided by Voices, I will be extremely surprised.

It may be raining at the moment, but that is not stopping me from hitting a few sets that I have high hopes for. The early lineup has a number of folk bands that should be a lot of fun, including the Durham County Poets and Bitterly Healed. I am thrilled to be seeing Dan Mangan for the first time and my second shot with Basia Bulat. This one-two punch on the main stage I think will be a highlight of the weekend. If you want to beat the rain later in the day, I highly recommend Hat Fitz and Cara. There’s plenty to satisfy your musical appetite tonight, so I’ll leave the rest up to you. Hopefully there are some old favourites and new discoveries for you as well.

We have a bunch of photos from the first two days that we will be posting after the festival, so stop by here to see a few of em. Check back tomorrow for another recap and preview of Sunday’s action.