I must admit, when I heard of the imminent release of a second Edward Sharpe and the 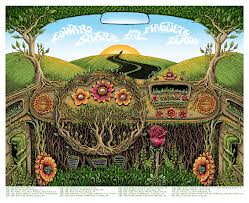 Magnetic Zeros album, I was worried. Don’t get me wrong, I thought that Up From Below was a great album well beyond their massive hit single, “Home”, but it was specifically the hit single that concerned me. It’s always strange when a band that falls so far outside the modern mainstream has a crossover with enormous popularity, and this throwback 70s folk band was no exception. A large part of me was worried that the band would use this popularity to try to replicate their former success with an extremely similar follow-up record and try to pander to the same audience with an album that would essentially be a pale imitation of their debut efforts (a la Mumford & Sons). I think that new bands are particularly vulnerable to this effect because they have not had enough time to really solidify themselves as musicians, and they might be afraid that if they change too much they may lose their audience and fall off the face of the Earth (a la MGMT).

Edward Sharpe and the Magnetic Zeros second record Here, did not fall to the mainstream trap. Instead of trying to make an entire album of “Home”, which is a great tune, they stuck to their desire to be that throwback folk band, and the result is a collection of songs that feel slightly more polished than their debut, but maintains the charm of a hippy band touring around in a VW bus with nothing but an odd assortment of instruments (guitars, didgeridoos, trumpets, various percussion, etc.) and a gigantic bowlful of love. Two records into their career, they are still still bringing about “a good time evolution” that will make you feel at peace with a desire to gather up your closest friends and fiend a good Fiya to dance around.

Here is a lot more blues centred than Up From Below, bringing the same overall groove that would have a hard time making anyone feel anything remotely close to sadness, madness, or badness. While Up From Below had a bit of a darkness and edge to a few songs, Here is a much more peaceful and content ride. It’s the kind of album that makes you want to relax by a body of water (perhaps even the Dock of the Bay) in the middle of nowhere with nothing on your mind. The record benefits from greater production value and layering that is both more noticeable and more carefully thought out. One complete contrast to the much acclaimed debut lies in the mere existence of deliberate solos. There’s nothing too fancy, but some nice little guitar and trumpet licks that spice the album up a little bit.

I think I’m going to give my favorite song on the album to “Mayla”, a soft ballad that develops really nicely, including a buildup that reminds me of something off Sgt. Peppers. I won’t spoil it for you, just sit back and listen.

If you wish to wander to a place of calm and serenity, I recommend starting Here.

One response to “A Man on Fire, One Guitar, and Two Dancing Feet”