For me, there is nothing much better than seeing live music. I love going to shows and seeing what a band can do while performing on stage. That being said, this is one reason why I love Baltimore’s Pigeons Playing Ping Pong – or just Pigeons for short.

While I love them for their live shows, they also have an extremely unique sound. The band blends funk, rock, electronica and even a little bit of jazz into one big conglomeration that is the perfect formula for a crazy dance party.

Every time I see Pigeons they keep getting better and better.

Formed in mid-2009 at the University of Maryland, College Park, Pigeons has the tightness of a band that sounds like they have been together for way more than 5 years. The band is made up of 4 young, talented musicians.

Greg Ormont on rhythm guitar and lead vocals, Jeremy Schon on lead Guitar and backup vocals, Ben Carrey on bass also helping with them backup vocals and Dan Schwartz holding it down on the drums.

The four of them make up the unique sound that is Pigeons Playing Ping Pong. 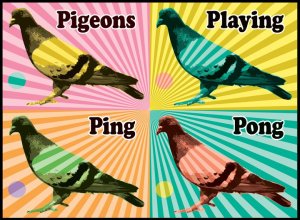 Anyway, go to one of there shows, you’ll see them constantly pushing themselves to new limits.

Unfortunately, for Canada, Pigeons have yet to leave the U.S. They have an aggressive tour schedule, playing 100+ shows a year, mainly up and down the east coast. Pigeons have been making quite a name for themselves with long tours and frequent summer festival appearances.

When it comes to putting on a show, Pigeons makes it happen. They throw themed parties during their bi-yearly residencies at The 8×10. Pigeons makes their audience feel like they are part of the overall experience. They have balloon drops and I have literally seen them make it in rain money at the tiny Baltimore club. I made like 5 bucks that night! The band members get really into the themes, sporting outfits representative of whatever the night’s theme. The audience is encouraged to dress up to part in the festivities.

Every night was a different themed decade during their March 2013 residency. This month’s residency is color themed. Everyone dressed up in red, white or blue for the July 3rd show.

In the past it has been a luau night or jungle themed or an all out pajama party. During jungle night, they played jungle tunes. Songs included Welcome to the Jungle by Guns n’ Roses and Jungle Love by Morris Day and the Time. They don’t just play the cover songs like the band that wrote them. Instead they have a unique take on these songs. Usually the cover songs are well known so everyone can sing along to them.

While Pigeons usually plays a few covers in their set, they have a ton of original material that the audience loves. They put their own spin into their vast catalogue of covers. This is one aspect I really love about them! Their covers are weaved in and out of their original tunes. There is really no telling what will played when walking into a Pigeons show.

One of my favorite originals is Julia, a sort of ballad about a breakup. It’s catchy and an audience favorite.

They interlace originals with covers or mash-ups. Some mash-ups include Wall Street a combination of the Grateful Dead’s Shakedown Street and Another Brick in the Wall by Pink Floyd. Another one of my favorites is Funky House, a well crafted combo between Funky Town and Brick House by Lipps, Inc and The Commodores respectively.

During 90’s themed night, they played What is Love! That song from A Night at the Roxbury! I couldn’t figure out what song it was until everyone started screaming out WHAT IS LOVE! BABY DON’T HURT ME! DON’T HURT ME!! It was awesome!

I wish the video was better, but here is their original, Schwan’s Anthem, segueing straight into What is Love at around 5 minutes

One of my favorite Pigeons segments was during Halloween of last year. It was Beatles night. Pigeons played their own Funk E. Zekial and incorporated 4 or 5 Beatles tunes into their song. It sounded great!

Here it is… It’s kinda long but definitely worth a listen.

So who comes to see Pigeons Playing Ping Pong? Usually the same people who like the Grateful Dead and Phish and are into that whole the jam band scene. That’s my scene. Like the other bands in the jam band scene, Pigeons too has a dedicated following – called the Flock. The Flock makes their way to Pigeons shows.

The band has only 1 studio release – The Funk E P, released in 2010; they are constantly on the road and don’t have time to hit the studio. You can download the EP here… and  check out their free downloads!

By the end of the year they should have their first full length album. I’ve been waiting so long!

While there is no end in sight, Pigeons Playing Ping Pong is here to bring the funk and certainly has a bright future in the live music scene!