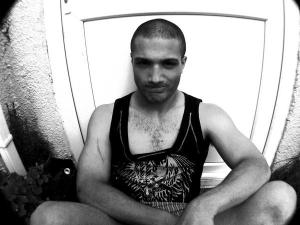 “Punk” is a bit of a flimsy term. People will go around telling that neon blue spiked hair is punk, or leather jackets are punk, or just yelling into a microphone is punk; and really, none of them are wrong. “Punk” as a term, depends on the human using it and they way I see “punk”, is just doing whatever the fuck you want. In a world where there is an owner to every object, doing shit solo is kinda hard. Today’s chosen artist does more than just do things on his own, he carves a path for future musicians; a path I hope to follow. So here we go.

Cosmo Jarvis is an anomaly of a human being, lots of ideas just floating around in his brain. He writes songs about nigh everything, and different genres too. His song “Betty” goes from orchestral, to jazzy, to rock, to ska, to a weird dubstep thing. It’s crazy how he does it, oh did I mention he isn’t on a label? So not only does he create endless potent music, he has very little help doing it. On top of the great music, he also makes hilarious and awesome music videos (he also made a full length movie called “The Naughty Room”). His most recent album “Think Bigger” has a really neat societal issue kind of tone to it, but again nothing limits this guy. He tosses in songs that don’t seem to fit with anything else around them. Which is why I would argue that this album and artist are pretty “punk”, sure he’s not yelling or distorting his guitar; but he’s going out of his way to not be on a major label (or any label for that matter) unlike a lot of “punk” bands *cough Anti-Flag cough*. That to me is pretty punk. Here’s my favourite song from his newest album.

Pretty cool if you ask me, just saying “Fuck what we have, I’m blowing it up.” That’s pretty fucking ballsy. The guy isn’t all about anarchy though, he’s totally down to just do what you want. As shown in this somewhat poor quality video of “Whatever”.

He’s a perfect level of reality with this new album, but I would highly recommend checking out his older stuff though, it has a lot of the same messages and can be pretty fun.