Hmm….today we have an interesting situation that has not come up since the beginnings 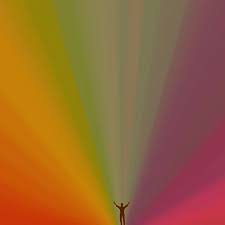 of my blogging career. It seems that while I was busy writing up a previously released Edward Sharpe and the Magnetic Zeros album, the band was hard at work on a third record. Last time around I talked a bit about my concerns for this throwback folk-rock band. I was uncertain of Edward Sharpe’s ability to diversify and consistently produce, and once again, I am reassured by this self-titled release. So let’s talk about why we’re still talking about these not quite one-hitter harbingers of love and togetherness.

I always find it curious when a self-titled album comes out later on in a band’s lifespan. Is this album in some way more representative of the band as a whole? Do the musicians feel they have finally found their defining sound? Is this new record the most collaborative of their albums? Impossible questions for me to really answer, but I suppose I can offer some insight. We’re still definitely listening to Edward Sharpe and the Magnetic Zeros. We’re still in a retro 70s groove, with a little bit of feedback to give us that old-school sound. And yet the sound that is being reinvented comes from a slightly different root. While Here featured some pseudo-gospel tunes, this time around I’m getting more of a Marvin Gaye soul vibe (“Better Days”). Edward Sharpe and the Magnetic Zeros features a much more rock-oriented sound than previous records as well, with some songs heavily reminiscent of The Beatles (“If I Were Free”), and a touch of Jefferson Airplane in the mix as well. Of course, we’re still listening to that feel good tone that is just brimming with positivity, so in some ways it feels like the last two records were a bit of an uncertain and bumpy road, and we have just arrived at our current destination. More confident, more powerful, some stronger psychedelics certainly didn’t hurt!

I’m also getting a very cohesive feeling from Edward Sharpe and the Magnetic Zeros. I like the way this album moves. I feel like the structure of the album works better than the last two, so huge points for that. The songwriting is hitting a new level of nuance and complexity in the interaction between band members. Maybe these guys feel like they’re communicating better than ever before. I think these days we’re dealing with a better group, and that is the theme at the heart of a happy band in a happy groove. Since the beginning the message has been clear; be at one with each other, share and include, don’t turn others away. Maybe this record is self-titled because the band feels that togetherness within themselves and have finally manifested as completely communal musicians.

Maybe this is the peak for Edward Sharpe and the Magnetic Zeros, but I now have no doubt in my mind. These guys are the real deal, so slap on those headphones. When Edward Sharpe waves you onto his VW bus, he’s ready to take you places. Share the love and take the invitation with a glow and a grin.