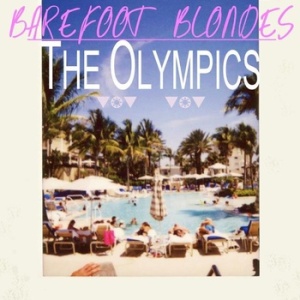 okay kids, part of the reason this post is so late is because i’ve been struggling with how to deal with an issue of what they call “journalistic integrity,” which i’m aware probably doesn’t even apply in the case of writing silly articles on the internet but still niggles at my critical sensibilities. i’ve been working for a while at how to address this and this is what i came up with: the olympics are a band that i know personally which i guess might have given them an unfair advantage in the “getting written about by lizzie” department. so think what you will about that, but it couldn’t in any way lessen the impact of the show i saw them play last week.

see, that album i linked you to up there is a good record with nice big sparkly hooks; think somewhere between big star and the strokes. the production is very full and shiny, but one has to admit to finding it a little flat, as though it’s gone so far into laid-back and effortless that it’s lacking a little bit in urgency. live though, the band is a totally different beast: for starters, they recently picked up a wild new guitarist who blows the songs’ dynamics wide open with blistering efficacy, like if “the edge” wasn’t a total fucking throw-pillow and actually lived up to his name – while it’s impossible to say whether the exponentially greater energy the band had on stage last weekend was solely due to lucas (said six-string samurai himself), it’s undeniable the songs’ impact are sharpened manyfold by his presence. another point of interest is the drums – sadly so often blurry and washed out by current trends in production, noel is a craftsman on the level of luke pyenson of krill, and on stage at gabe’s (by the way, one of the best-sounding venues of its size i’ve ever been to) the improved environment made lucid his utterly massive precision, those incredible juxtapositions of scale that characterize the most exciting contemporary rock n roll drumming.

but the final ingredient in this potent mix is pure personality. the lead singer, jeff, besides being a total dreamboat is constantly engaging without assuming anything at all, cracking jokes, mugging, twirling his guitar and generally letting his loose-fitting v-neck t-shirt do its job; meanwhile, keyboardist trevor abuses the audience with affection while delivering pointed compliments to the musicians he’s shared the stage with that night. lemme tell you something folks, it’s really fucking hard to find bands who banter comfortably on stage without sounding like total assholes, and the olympics have a more inviting stage presence than all the other bands i’ve seen in iowa city combined. and this is good news for you, dear (american midwestern) reader, as these boys are gonna be heaving onto stages across the prairie within weeks. check them out if you’re anywhere in any of these neighborhoods:

and check out their album from last fall, “barefoot blondes,” to study up: