Sometimes bands get tossed into the jam band category, even if they are not a jam band. This, however, is not the case for The Mantras because there is no doubt that The Mantras are a jam band.

I would argue that jam bands didn’t ruin my life, but instead made it better! I have dropped a ton of money on live music – nowadays mostly jam bands. And have traveled the U.S. touring with jam bands I love, all while having amazing experiences and meeting new people. So no they didn’t ruin my life! 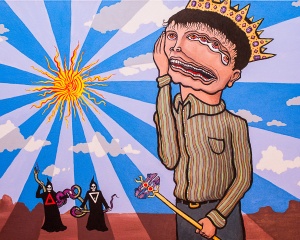 The Mantras’ 2013 release, Jam bands Ruined My Life further proves that this band can truly jam. Their sound mixes up different genres including, funk, electronica, jazz and even a bit of heavy metal. Their music is most definitely going to have you dancing in no time. Jam Bands Ruined My Life is a high-energy album with a very tight sound. There is limited computer work going on when playing live which, in their words shows “the human side of music.”

Listen to the whole album on bandcamp – JBRML.

Kinetic Bump – The live electronic aspect of The Mantras is clearly evident song. At some points this song really reminds me of Lotus!

Tell me these 2 songs don’t sound the same!

Still both are great!

House Of Cards / After Awhile Crocodile – If I didn’t know these songs were by The Mantras, I would guess Umphrey’s McGee was playing Both songs have faced past vocals, on top of heavy music, much like Umphrey’s! You can hear their metal influences throughout these tracks..

J.B.R.M.L. serves has an interlude between the first half of the album and the second half. It starts off quietly and the piano comes in soon to be followed by guitar.

Dr. Ssanasinod kind of has a  Frank Zappa-ish feel to it. Weird vocals and crazy chords throughout the song. Interesting to say the least.

Man You Rawk – The final song of the album is my favorite. Man You Rawk not only has a Middle Eastern feel to it but also gets weird with electro-fusion. Man You Rawk seriously showcases their ability to play different genres.

Hailing from Greensboro, North Carolina, The Mantras have been building a nice name for themselves over the past couple of years in the jam band community. They have been playing to bigger and bigger crowds up and down the East coast and as of more recently have been hitting Midwest venues. Like many jam bands before them, they have built a following of dedicated fans. I have not gotten a chance to see them yet, but when they pass through Baltimore, I’ll be there

Weather or not your lives have been ruined; The Mantras know what it really means to be a jam band.