If you haven’t heard of Sargent House, now you have. Founded in 2006 for a wonderful band (who just recently ended a hiatus), RX Bandits, Sargent House has been going strong ever since. I love the label and the artists they manage, but it saddens me to say that I’ve only really scratched the surface of their lineup. Not that I haven’t heard some fantastic music (And So I Watch You From Afar, Boris, Bosnian Rainbows, Deafheaven, Adebisi Shank, Indian Handcrafts), but I feel like there are far more great artists that I have yet to check out.

I would now like to shift the focus to a smaller group on Sargent House; they are known as Zorch. As their website explains, Zorch came together in Boston and moved to Austin, Texas in 2009. Their reputation for intense, visually-stimulating live shows and fan interaction has been growing ever since the move to Austin, and will hopefully soon spread further. 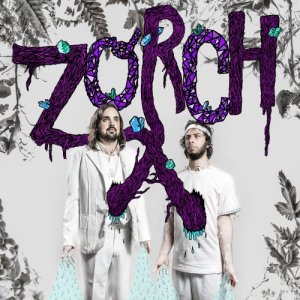 Normally I like to listen to an album or band as much as I can before I write or tell someone about them, but I had no idea what Zorch sounded like up until a few hours ago. What initially attracted me to this two-piece, composed of keyboardist Zac Traeger and drummer Shmu, was that they were signed to a label that has never let me down before, and the title of their debut: ZZOORRCCHH. How awesome is that?

Let me tell you, this baby is one huge slab of a debut. Peppered with beauteous electronic flourishes and occasional vocals, ZZOORRCCHH is chock-full of solid, driving jams that aren’t afraid to get weird and hyperactive. Constantly shifting, yet always staying strangely familiar, Zorch fearlessly blend toe-tapping rhythms, frenzied, energetic drumming and noisy cacophony with a fiercely bright optimism and a sprawling, expansive sensibility. Just listen for yourself:

In the mood for something a little more atmospheric? Give Mutwa a listen: