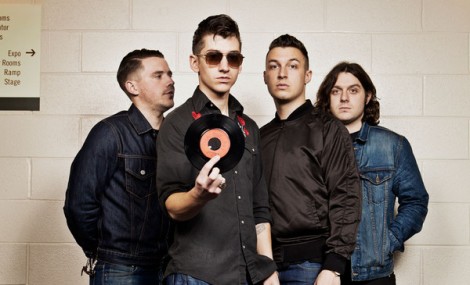 This is not your normal, run of the mill, album review.

Arctic Monkeys are one of my all-time favourite bands. I can’t help myself, I just can’t when I hear their music it’s just so magical. They’re storytellers and naughty sinners in one, or at least it makes you feel naughty when listening. It’s up to you what kind of naughty. I’m not a fan of making an album into a concept album, there are some exceptions, and not that this album is a concept album by any means… but I almost imagine a rough-and-tough kind of rocker/rebel party scenario. This album takes me from the beginning to the end of the night and if you come along with me I’ll take you through it.

Do I wanna Know?

Track one. How hot does this song make you feel, whether it’s the slow and sexual beat or Alex Turner‘s smooth vocals. I can’t believe this song exists and by this fantastic band. This song makes me irrational and like I wanna rip off someone’s shirt, around the time Turner brings the chorus around again. The vocals behind Alex Turner’s voice during the song almost feel gospel, but the beat brings back 1960 vibes. It’s intoxicating.  It’s definitely the song playing in the background as lovers hide in a bedroom safely away from the rest of the party, teasing and taunting one another with strip teases.

One for The Road

By this time the album has taken a rather funky disco turn for the better. This song has good 1970’s feel to it, from the rock guitar solo to the disco vocals ooo ooo-ing.

Let’s skip a head a bit… and mind you I’ve heard some speculation about this album. Some seem to think the latter part of the album is better and more Arctic Monkeys style. I laugh at those one minded thinkers because every band is going to test new sounds and play around with their style, I personally think Arctic Monkeys did that successfully… and I dig the first half of this album, but I’ll admit the other half does have traces of old Arctic Monkeys.

(songs skipped, Arabella and I Want It all, both great tunes)

This song. This friggen song. It’s exactly the kind of way I look at parties. Everyone and every object has slowed down, but I am walking around in real-time… watching and observing each party guest. A rather cliché looking group in every room, drinking, doing drugs and spilling drinks. Nearing the end of night the guests leave in crowds and slowly fill the streets with drunken nobodies. It truly is the No. 1 Party Anthem.

Stop The World I wanna get off With You

A deluxe LP edition that was released with the album, but is only available on vinyl. This song is on B side, A side has another single called 2013. But this song calls to me the most, so I thought I’d add it to my review. Opening with a rather suggestive line, “Open sesame” follows along with the sexual vibes this album gives off. It’s a fun beat right of the bat and it’s rather devilish in its own sort of way. This is the part of the party where the bad boy spots the rebellious girl in all black, watching her from across the room, he plans his whole night around her.

Now I told you in the beginning that this wasn’t a normal album review. If you understood any of my ramblings then bravo, you’ve come to the realization this album is bad ass and will totally turn you on. If you’re into that then I highly suggest buying a copy of it or going to see them perform live. Unfortunately for me I didn’t attend their show in Toronto because the pre-sales made the show sell out and then people sold tickets for a hundred to three hundred dollars a piece. Needless to say I was very angry and even more so because of all the built up sexual frustration from listening to the album on repeat. I couldn’t even let loose because I wasn’t going to see Alex Turner in his leather jacket and sexy pompadour hairstyle. I’m sure my boyfriend enjoyed it though…