So there’s been a lot of news going around about how Tom Delonge has been too busy to work on Blink 182’s (An independent band since 2012)  new album that they had promised to release…around this time actually.   Oh CRAP! Side note – I’m Daly, the newest addition to the wonderful staff at The Indie Blender. If you like me you can follow me @DalyRy….But you probably won’t so lets get back to the music at hand.   Anyways, yes, all the time away from Blink has apparently served Mark Hoppus well. With great boredom comes great creativity. Tired of feeling like the imagery the picture below describes, Mark has started a new Band with long time producer friend Chris Holmes. They premiered their first single and I for one am actually digging the deep dark guitar work and simplicity of the remix.

Their first release is a rework remixed version of this song I have never actually heard of before by someone whose name is Nova Rockafeller, but was good in it’s own right. A song about the 1990’s…Torn Jeans, Green Day name drops, catchy sing along verses, it’s all there, and you should hear it.

*It’s poppy, it’s angsty, it’s fun. It’s basically what Avril Lavinge should be.  If you want more Nova Rockafeller Check out her Twitter.*

Now we bring it back to Mark Hoppus and Chris Holmes, or as their new band is called Nothing And Nobody. They got their fingers on Nova’s track, and created THIS.

I like this. When I heard “remix” I thought great…The Blink 182 bassist is trying to be the new Skrillex. Thank the stars I was pleasantly surprised.  When remixes are done, it is very easy to go overboard. Artists will put so much into it that it compromises the integrity of the song and when I hear this, the simplicity of it is pretty much pure eargasm. It’s almost as if they stripped the original down and made it better, more chill.

It has not been said whether Nothing and Nobody’s album will be full remixes or contain originals as well, but regardless of the direction they choose to take, this Indie Blender writer cannot wait for it to be released in the near future. 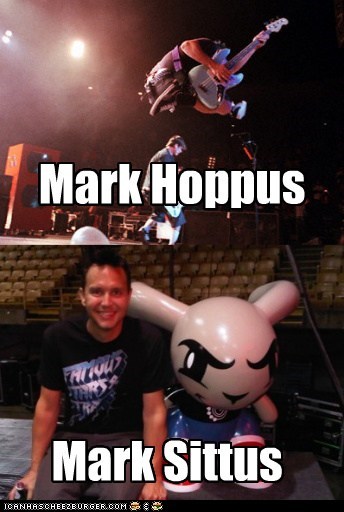