I’ve been to a lot of shows recently in the last year or so. I have seen many different rappers in concert, heard many crowds cheer “encore” and waited in many lines. But last Friday night I saw a show that blew me away and had me captivated the whole time. The rapper performing was the legendary Shad who was playing at Massey Hall. I had never been to Massey Hall so I had no idea what to expect. After work my friend Jacob and I rushed as fast as we could to the concert hall (of course we had to make a quick stop at Wendy’s shouts out to Wendy’s). Sadly we missed the opener Zaki Ibrahim who I was also looking forward to watching but we made it during the intermission before Shad went on.

Running out of the Eaton’s centre we were scrambling to find where Massey Hall was until we saw a bright sign calling our names! There it was in all its glory. We rush into the theatre and up to our seats. As we get into the hall I just stopped in my tracks and looked up to see all the people who filled the seats. It took my breath away it was packed. Everyone was there to see the rapper from London Ontario, Shad. The lights dimmed as the audience started to cheer and chant “SHAD SHAD”. The band started to play as Shad arrived on stage the crowd went crazy! Now this was the first hip hop show I went to where the theatre is all seating. Before Shad started to perform I was wondering how the show would work. Would everyone sit in their seats and watch? Would they stand? Would some stand and some sit? Once he took the stage one of the first things he said was “everyone stand up!” and the whole crowd immediately were on their feet, for the rest of his set almost 99% of the people stayed standing. I have seen Shad perform before at the Danforth Music Hall not too long ago. But this time it was even more incredible it was something about being in Massey Hall with a live band, 1000’s of screaming fans all to see one man. It gave me chills to think about how strongly the city and country supports rappers like Shad. He played fan favourites like “Stylin” (he brought Saukrates out!),

“Rose Garden”, “Old Prince Still Lives at Home” and many others. He even performed his version of “American Pie”, that song live took my breath away. This was so much more than a concert it was a moment in Toronto hip hop history that we will all remember forever. Time flew and next thing we knew Shad was performing his last song “Remember To Remember”. The hard hitting, catchy song echoed through the hall as Shad rocked the stage and tore down what was left of Massey Hall. Once he left everyone started to scream, cheer and chant “Encore”! 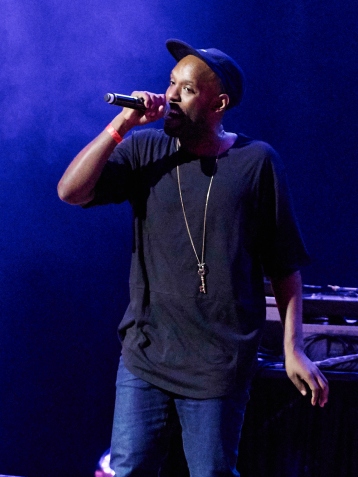 Shad runs back on stage with DJ T.LO and says “this is the part of the show where DJ T.LO plays instrumentals and I try to remember the lyrics”. DJ T.LO and Shad played their song from their latest EP Flight Deck called “Hang On”. After this amazing night we were all wondering how he would be able to top what he had already accomplished. Well he defiantly ended the night on a huge high note as he did a freestyle that lasted at least 5 minutes.

It was crazy he just kept throwing out punchlines and metaphors that left me speechless. I remember as we were leaving I said to my friend “damn that was the best thing I have ever seen!” To summarise this was one of the best nights and concerts of my life. And I’m not the only one who thought this. So thank you Shad for everything.

One response to “Shad took over Massey Hall. Concert Review.”