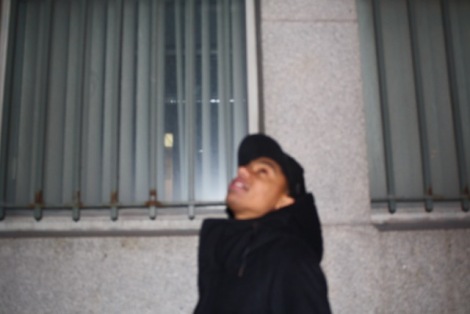 Canadian Music Week has taken over Toronto! This week you can see some of the greatest names in music today. One name you need to know is Q Like The Letter. I remember going through the CMW line up trying to find artists to go see perform. Q’s name caught my eye so I read his bio and started to listen to his hot fire single “Dvrk KnightS”.  I was instantly hooked and my curiosity got the best of me, I needed to know more about him. So I invited him out for coffee. My usual coffee spot was busy so we walked down the street to a Starbucks. We instantly hit it off talking about school, music, friends and shoes. Before the interview even started it felt like we had known each other for years. Honestly Q is one of the nicest people I have ever interviewed (he offered to buy my iced coffee).

As I learnt more about Q, I found out he started playing music at a young age.

Q: I grew up in a church band. I yelled and screamed and fought my mom to buy me a guitar. We went to my grandma’s house for Christmas Eve and she brings down this guitar case. And I’m all amped, yes it’s a guitar! I unzip the thing and it’s a bass. I’m like what the hell is this? What am I going to do with this thing? They’re like “church needs a bass player not a guitar player.”

Once he was in high school he bought himself a guitar and transferred his skills from the bass to the guitar. With this being Canadian Music Week I wanted to know what people can expect from seeing him perform live.

We talked about his upcoming EP Dvrk KnightS, which he is supposed to release May 9th.

Let’s talk about the EP. How long was that in the making?

He was telling me “Dvrk KnightS” was about a year or so in the making. Q started to tell me the story behind the EP and how it is all supposed to play out.

Q: It’s going to be set out like this. The whole concept for Dvrk KnightS is. Well the single I just put out “Dvrk KnightS”.

It’s really good by the way

Q: Thank you, thank you.

The last 3 songs Q put out “We Got This”, “Throw ‘Em Back”  and “Late Night Cruise” Were all kind of like his 2nd push into music. He actually made all those songs after his single “Dvrk KnightS” which was made over a year ago.

Q: Since “Dvrk KnightS” was such a gem for us we didn’t want to just put it out. We’ve been sitting on “Dvrk KnightS” for about a year. Just have it sitting there for almost a year and waiting for the right time.

Hearing that started to make me realise Q Like The Letter is the real deal. He knows what he is doing even though he is still really new on the scene. All his moves are calculated and well thought out. Just like all great artists he wants to make sure his art is perfect before releasing it.

Q: I did the my boys test, that’s what I call it. So I brought all my boys over and played it for them. They all liked it. They were all like “this is your best one yet.” Since it was the best one yet we wanted to do it properly. And we started forming it (the EP) around it.

Q tells me that with Dvrk KnightS he really wanted to capture the story of our generation.

Q: So like it’s the same idea with generation Y, we have a different way of doing stuff. I based it around that ideology how night time is our time, when the sun falls that’s when we get to do our own thing. And our parents’ generation don’t get to tell us what to do.

Dvrk KnightS the EP follows Q for a night starting with the intro (sunset) to the outro (sunrise).  He also says there is a really cool spoken word interlude on the EP. With Dvrk KnightS being a product of Q’s hard work there were still times he needed an extra push. His brother helped hone his motivation when he gave Q a vision board.

Q: Honestly it’s kind of weird to say this but it sat there for like 2 years blank, nothing on it. One day I said hey why don’t I just sit here and really think of what I want? It started out with a jeep. My first car is going to be a jeep for sure.

A jeep is not the only thing Q wants; he has his eyes set on taking over the world. And he has all the skills it takes to make it. He’s motivated, innovative, creative and easy to talk too. This is why Q Like The Letter is a star in the making and his time to shine is now.

Q: I told my buddy the other day and I was a little intoxicated but I’m like we are going to take over the world. We were just walking to the club; I looked up at the CN tower and said we are going to do this.

One response to “The Only Letter You Need To Know Is Q. Artist Interview.”