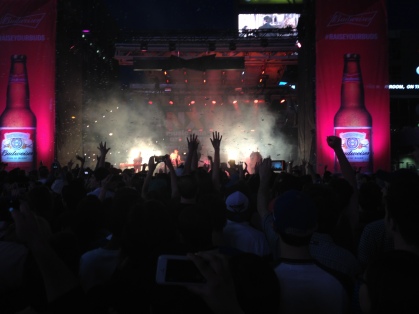 It was a sunny June 19th as I headed out again on some more NXNE fun adventures. I was meeting some friends at Young and Dundas to see Hollerado. When I arrived downtown I head quickly to the Eaton’s Centre to grab some teriyaki and water. Got stay hydrated! After stuffing my face with some food I make my way to the busy Young and Dundas Square. It was a beautifully hot day as people from all over the city crammed the square. I find my friends just in time to catch The Born Ruffians play.

I’m not going to lie I haven’t heard much of their music but they had an energy on stage that pulled me in right away. Even though I didn’t know the lyrics I was singing the chorus’s loud and proud! It was a perfect day as the sun started to set behind the tall buildings surrounding us. Hollerado took the stage as the crowd erupts in a roar of cheers! “Hollerado! Hollerado!” they chanted. I’ve seen them play once before and ever since then I’ve been a big fan. They just blew me away that one Saturday night at the Burlington Sound Of Music Festival a few years back. It wasn’t just that they sounded amazing live it was also their stage presence and how they talked to the crowd. They made everyone feel like we were all best friends just hanging out at someone’s house. So when they took the stage that June 19th I lost my mind as I was dancing, jumping and singing my heart out. They did not disappoint as there first song of the night they blasted the crowd with confetti! Hollerado rocked out ear drums with classics like

“Americanarama” “Good Day At The Races” and so much more. They even caped off the night with their insane cover of “Rocking In The Free World”. A fan literally just yelled at them to play it and they started rocking out. I got hit serval times by a beach ball, felt super claustrophobic in the crowd, got sprayed with water and was sweating in the boiling sun. But it was all worth it as I made friends, danced my ass off, sung my heart out and never stopped smiling for one moment. Hollerado never disappoints and it’s amazing to see how far they have come from that day I saw them open up for Tokyo Police Club in Burlington. It was an incredible night that no one there will forget.