When singer-songwriter David Bazan announced in late 2017 that he would be resurrecting the twelve-years dead Pedro the Lion, it came as a surprise to longtime listeners and long-abandoned Pedro fans alike. His solo ventures, starting with 2007’s ‘Fewer Moving Parts,’ took on a more personal nature and his sound shifted from aggressive, distorted guitars to synthesizers, but Pedro the Lion was always a revolving door of musicians collaborating around Bazan’s songs. The music never stopped, so why bother bringing back the moniker?

In an interview with NPR in February, David put it bluntly: he missed having a band. “I had been playing solo under my own name and in a band under my own name off and on for years and I was trying to find way to regularly play with a band again,” he told NPR’s Sarah McCammon. “One thing lead to another, and it became clear that the way to do that was to revive the band name Pedro the Lion and once I made that decision everything kind of fell into place and it felt really right.” 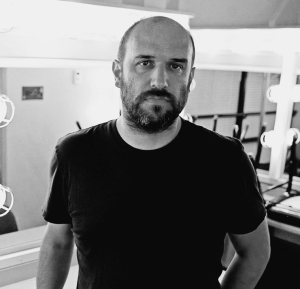 The current incarnation of Pedro the Lion is also the same three piece that he played with on his last tour of Bazan’s solo music, made up of guitarist Erik Walters and drummer Sean Lane. Nothing obvious has really changed, making the “reunion” feel like a different coat of paint on the same tour van. Something else needed to be at work. When Pedro the Lion stopped in Toronto for a rain-drenched show at Lee’s Palace, Bazan offered a hint.

“The songs are all about politics. Not so secretly, so if you’re hearing that in them, you’re not wrong.” Bazan explained as Walters turned his guitar. “I’ve been writing songs taking the piss out of toxic masculinity for about 20 years, all the while, contributing to toxic masculinity as well… It’s a blind spot, so we’re just going to keep looking right at it tonight, over and over again in the form of song.”

Bazan has never shied away from his feelings, whether personal, political, or religious, but the current social-political climate in his native United States seems to have bestowed his music with a new sense of urgency. After his candid speech, every song took on new weight. “When They Really Get to Know You They Will Run” became even more poignant than it was in 1998 when it was recorded. “Criticism as Inspiration” is reborn along with the band itself, with lyrics like “it makes me feel so good to always tell you when you’re wrong” ringing truer than ever in a time where more and more patronizing men are being put in their place. The entirety of his 2002 record ‘Control,’ an album about greed, lust, and power, can easily be applied to every drop of news pouring from Washington every single day.

Bazan weaves tragedy and cautionary tales into his songs, and the messages he’s written across his catalog of songs, spanning over more than two decades, are still relevant in 2018. Where it’s easy to write off a reunion as an attempt to recapture something lost to time, Bazan waking up Pedro has forward momentum. It’s more in tune with the reunion and final record from A Tribe Called Quest than bands like the Police, joining together to appease fans. It’s the next step in the creative evolution of a writer who’s constantly developing and changing his voice. As he worded it towards the end of the night at Lee’s, “It’s the redemption of my musical process.” Towards the end of the night, the band performed a song titled “Quietest Friend,” a cut from an upcoming album ‘Phoenix.’ Aptly titled, the band’s revival lines up with a particularly volatile time for North American culture, and whether by coincidence or by design, Bazan no doubt has something to say about it. Compared with his solo work, Pedro the Lion songs were generally less personal, and the band format seems to offer Bazan the soapbox he needs to say what’s on his mind.