Last night I walked into the National Arts Centre with no real expectations. The name on the bill: a Winnipeg outfit known as 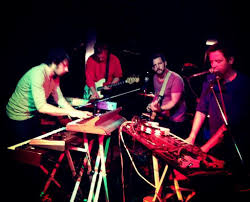 Royal Canoe. I had no idea who these guys were. I had heard of them only the day before, and having heard nothing but a few songs I entered a room full of round tables and little candles with a completely open mind. It took almost no time at all for Royal Canoe to shape my brain from open vessel to one that just wants an endless dose of synthesizers.

There were synthesizers everywhere, and with the first strike of those weird and wonderful keys the tone was set. Synthesizers seemed to reach out from the deep dark recesses of my mind. The heavy stomp coming from double percussionists sent my imagination onto a midnight city street, with the keys grasping at my coat hoping to drag me into an abandoned alleyway. And then came the vocals. Matt Peters has what would be an easy clean voice if it weren’t for the borderline hysterical edge that simmers on the surface of melody. The rest of the band fills in all the harmonies you could want, except for one. I heard a voice, unsettling yet seductive, in a range far below the physical capabilities of human vocal chords. It called to me from the void, a vocal pedal designed to make me surrender my soul. But that was just the beginning, and Royal Canoe had a long way to go.

One of the things I loved most about this show was the band’s ability to use so much layering but simultaneously create space within the music. Matt Schellenberg is nothing but a synth-wizard, using multiple keyboards to paint a colourful soundscape, and everyone else knows exactly how to sit and build on that soundscape with their own keyboards, guitars, bass, etc. But the thing that impressed me most was the dual percussion. Derek Allard and Michael Jordan seemed to have a remarkable chemistry. Most bands that use two percussionists tend to give one all of the main kit duties and leave the other to a minor supplementary role, but not Royal Canoe. Each of them knew exactly how to fit into the rhythm of the other, and with one playing a kit and the other on a drum pad the exquisite blend of real and artificial absolutely grounded the rest of the band. Royal Canoe is fond of little rhythmic changeups that keep the audience on the edge of their seats, and this wouldn’t be possible without the tightest percussion duo.

Brendan Berg was lurking on the bass (and synthesizers, of course) the entire night, the shadow behind the sound. Bucky Driedger‘s guitar was eclectic and jarring, the perfect countermelodic match for the rest of the band. Despite their attempted claim that Winnipeg has a better skating rink than Ottawa (come on guys, we all know the Rideau Canal wins every time), Royal Canoe won over every member of that crowd. They even signed my freshly purchased album. Class act.

Towards the end of the set, a fear-infused “Nightcrawlin” brought truth to a comment my friend made. She described the show as “a mix of hope and a psychosexual nightmare…” I couldn’t sum it up any better than that.

Royal Canoe just released a new record, titled Today We’re Believers…stay tuned next week for more on that one.