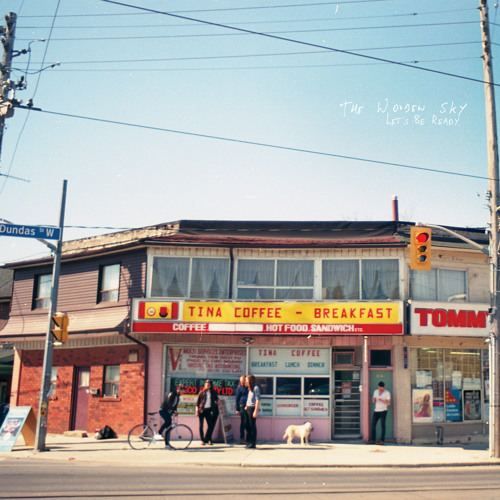 The coming of fall in the next month has been brought just that much closer with the new record Let’s Be Ready, by Toronto-based folk rockers The Wooden Sky.  For me, at least, their acoustic, heartfelt folk is synonymous with the brisk winds and imminent snow of a Canadian fall.  The new album does take the band into a new,  more mainstream sound, but does stick to their recorded-in-a-cabin-in-the-woods sound they are known for.

The opening song, “Saturday Night” is a rock anthem about going out on the town to forget about the pain of life and death.  Gavin’s rough vocals croon about how he “slipped in through your window, hoping you wouldn’t mind if I want to sleep beside you baby, just for the night.” and his guitar fills in during sections, instrumentally continuing the story.

The next two songs, “Our Hearts Were Young” and “Baby, Hold On” are definitely shoe-gazing while dancing with your sweetheart worthy.  In “Baby, Hold On”, the backing vocals help set the mood and is more guitar and bass driven than other songs on the album, which have Andrew Kekewich’s drums leading each song throughout.

The listener is thrown back into the new, more rough sound with “When The Day Is Fresh And The Light Is New”.  This song is very guitar-heavy with both Gavin and Simon rocking on the guitars.  The listener is thrown back in time with “Kansas City”, which sounds like a b-side to The Wooden Sky’s first two albums, When Lost At Sea and If I Don’t Come Home, You’ll Know I’m Gone.  The use of Simon’s keyboards and some feedback help give a fuller sound to this song, with the majority of the song focusing on Gavin’s vocals and guitar.  We also really get to hear Edwin’s violin near the end of this song, which is reminiscent of their past albums.

“Write Them Down” could be considered an acoustic track, with mostly just Gavin, Andrew Kekewich and Edwin playing on this.  The thumping drums and short guitar melodies give a feeling of anxiousness to Edwin’s haunting violin.  The rock sound returns with “Maybe It’s Not A Secret”, which is reflective of East Coast rockers Wintersleep.  There is a lot more use of guitars that build on one another throughout and the drums are very much the glue holding the song together.

“Shake For Me” has a darker feel to it than other songs on the album, having a deeper, fuller sound coming from the whole band.  It is very much a song to listen to while driving through empty streets late at night.  The last minute of the song becomes just a all-out jam session from the band, with each member playing off of each other.

The last two songs, “Let’s Be Ready” and “Don’t You Worry About A Thing” sound like a bit like bonus acoustic songs added to the end, with Gavin serenading about a woman with his acoustic guitar in the title track.  The final song has more of that jam session sound to it with a fantastic call and response of the title between Gavin and the band.

Overall, the album is definitely a new path for the band and a very strong record.  The Wooden Sky has taken the live performance they put on, and have nicely bottled it up in 10 tracks.

Check them out on their new tour to support this album, including two dates (October 17th and 18th) at Lee`s Palace in their hometown of Toronto.