I once again failed in my mandate to hear some Wake Owl last night, but I did manage to get to the festival in time to catch one of my most anticipated acts, The National. Clearly I was not the only one who was looking forward to this show, as the festival grounds were packed with eager fans looking for a dose of indie rock. As far as I’m concerned, The National delivered on all fronts. They provided the crowd with drama, energy, and passion, all coated in a thick layer of distortion and noise. Matt Berninger led the show with captivating charisma. He would begin a song calmly hunched over his microphone, and eventually build his way up to shivering screams. He let his passion carry him directly into the audience, where we observed him half collapsing into the arms of adoring fans, simultaneously releasing every ounce of power he stored in his lungs. Each song seemed to build up to new musical heights, accented by a dynamic and seizure-inducing light show. The National ensured that there would be no dull moments, and made the most of every minute of their set. The audience also benefited from the addition of a trumpet and trombone, which really filled out the sound with the colour that only brass instruments can bring. On Friday night, The National put forward a solid bid for best performance of Ottawa Folk Festival 2014. 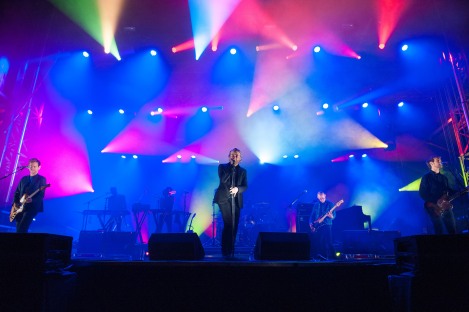 As The National called it an evening, I wandered over to the free section of the festival to catch the late night Sprag Session show. Walking into the craft beer tent, I had no idea what to expect. I was quickly greeted by the familiar tones of the lead fiddle, the banjo, the keyboard, the bass, and the drum kit. In direct contrast to The National, Sprag Session was fun, upbeat, and incredibly danceable. Mixing the classic East Coast sound with rock and funk, we closed off the night with a little instrumental folk music to lift the spirits. Sprag Session was a fantastic way to end the Folk festivities.

Time to look ahead to what we have coming today. Despite the cold and the rain, the Ottawa Folk Festival will have some quality musicians to fend off the miserable weather.

The Devin Cuddy Band: This bluesy, folky Toronto outfit will play some friendly tunes to keep you on your feet. These guys will help ease you into the day and are well worth seeing. Find them at the Ravenlaw Stage at 4:00.

Sun Kil Moon: For a bit of info about Sun Kil Moon, check out my preview from last week. They will be occupying the Valley Stage at 5:00. You can also catch Sun Kil Moon on Sunday, so it may be worth splitting today’s set between them and The Claytones.

Neutral Milk Hotel: If you are familiar with this indie band, then I really won’t need to do much convincing to get you to this set. After releasing their incredible indie folk-punk opus, In the Aeroplane Over the Sea , frontman Jeff Mangum lost it and disappeared for over a decade. Neutral Milk Hotel reunited last year seemingly out of nowhere, and have been touring. Most fans of this band had come to terms with never being able to see them perform live. Now they have decided to grace the Ottawa Folk Festival with their unique take on instrumentation and harmony, and I cannot wait to see what they have in store.

Sunday will bring us nicer weather and an equally excellent lineup. Here are my picks.

The Wooden Sky: I saw this folk band a little while back at the NAC, and they put on a lovely, relaxing show. To read more about their live show, check out my review. Pierce also took a crack at their new album, so read about that one here. Find them at the Eh! Stage at 5:00.

The War on Drugs: I don’t know much about these guys, but their indie-pop stylings remind me of a lighter version of Arcade Fire. I will be hearing a few of their tunes with an open mind and little expectations. They will be playing the Eh! Stage at 7:00.

Matt “Guitar” Murphy: This bluesman has been a legend since the 60s, and he’s playing in the free area, so I see little reason not to hear some of his set. If you love blues, this is one not to miss. Find him in the free area at 7:00.

Hey Rosetta!: These guys are my favourite current East Coast band. Mixing folk with indie rock aesthetic, Hey Rosetta! puts on a fun, lively show that has no shortage of drama and power. Their very recent addition to the lineup put a rather large smile on my face, and I cannot wait to see them again. Their performance in the headliner slot is a must see. Find them at the Eh! Stage at 9:30.