Last Thursday I popped over to the NAC for a nice relaxed evening of good old fashioned folk music. Well, let me just 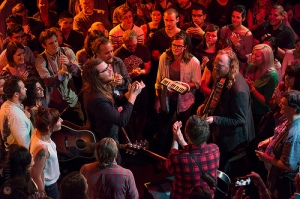 say that the night turned out to be another wonderful addition in the NAC Presents concert series. I walked into the Fourth Stage to the familiar round tables with little candles and sank into the cozy atmosphere of the room. What I heard from certainly gave me some relaxing tunes, but The Wooden Sky packed far more of a punch than I had anticipated.

The Wooden Sky blended folk, blues, rock, and country, into a delightfully diverse double-set evening. Let’s start by talking about Gavin Gardiner, the lead singer, guitarist, frontman, and primary songwriter of this Toronto outfit. Gardiner’s voice is easily the focus and highlight of The Wooden Sky, with a deep soothing tone, rich in character and sincerity. Gardiner has an immense amount of control over the way he uses his voice, which allows him to completely mimic the mood of the moment and amplify any sense of atmosphere created by the instrumentals. He can sing soft and sweet, with a tremble in his voice, or he can come out booming and powerful, sending shivers down the spine. He is complemented by some wonderful falsetto harmonization from Simon Walker. During a few selections that evening, The Wooden Sky decided to cut the power and go without amplification, and it was in these moments that the vocal duo really blew me away.

One of the greatest strengths of this band was their ability to dynamically move through a song to match the storytelling nature of folk music. As we sat and listened to tales from the road, it was so easy to be swept up in the atmosphere created with the intricate finger-picked guitar, smooth bass, rolling drums, and just a hint of synthesizer. I was a particular fan of the drumming when Andrew Kekewich decided to stick to the toms and cymbals, which to me is the recipe for power in folk music.

I have only one criticism of the concert, and this is something that I will say a lot as a jam band aficionado. I wish that they had explored the musical space a little more. The band was so clearly in tune with each other that I felt a good solid folk jam was coming at any moment. While we did get a few touches of jam, I would have been happier if The Wooden Sky had chosen to take a few songs out of the setlist and let the others tunes breathe. Nevertheless, there was still room for some solid solos here and there.

Overall it was a great performance from The Wooden Sky. They’ve just come off the release of their third album, titled Every Child a Daughter, Every Moon a Sun. It’s well worth listening to, as well as their early stuff, and their well worth the cost of a ticket if you’re looking for an evening of folk.

One response to “A Warm Evening Beneath A Wooden Sky”