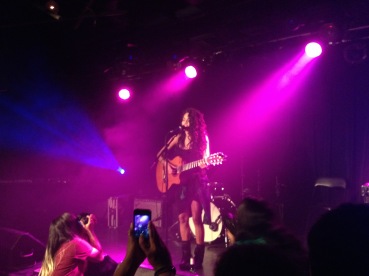 I’ve been trying to figure out a way to put in words how amazing Canadian Music Week was. And you would think as a writer I would be able to do that right? There is so much that happened this week, I have no idea where to start. I think a good place is when I saw Jessie Reyez, The Flan and Post Malone all in one night! The doors opened at 8:00 pm and I was meeting my homies at Tattoo. I ended up getting there super early and was able to get in to see sound check for the Know Unknown event put on by The Remix Project. As I sit down Jessie Reyez was belting out a beautiful song strumming her guitar.  And those 2 minutes I heard her live during sound check had me hooked. I needed to hear more! Even though I heard her sound check I was not ready for how awesome her set was going to be.  My friends arrived on the scene so I hopped out of the venue and we grabbed some Veal Sandwiches down the street (shouts out to San Francesco Foods those were life changing sandwiches). With our stomachs full we headed back to Tattoo and quickly go into the show. The venue started to fill up as the first act went on. It was finally time for Jessie Reyez and in the words of Kevin Hart “WE WEREN’T READY”. She got up on stage with a beer in one hand and a guitar in the other. In no time she had people bouncing with her cover of Jay Z’s “I Just Wanna Love U” and Black Street’s “No Diggity”. I was jumping up and down doing the silliest dance moves. For about 40 mintues Jesse Reyez took over Tattoo; leaving everyone stunned with her amazing voice, cute personality and incredible song writing skills. Remember what I’m about to say, Jesse Reyez will become one of the biggest singers of our time.

Brampton native The Flan was next as he brought his powerful energy to the stage. He did not disappoint and showed us why he is the next up. The Flan is quickly raising the ranks of the hip hop ladder as his début mixtape 905 buzzing all across the country.

After seeing two very impressive artists perform we quickly grabbed an Uber (shouts out to our Uber driver, you are the best) and headed for The Mod Club to see white Iverson himself Post Malone. I didn’t know exactly what to expect because I had never heard any of his songs before. Even though before the show I had been hearing his name everywhere I went. And now I know why.

He took the stage to a packed crowd who was cheering and screaming as “White Iverson” started to play over the speakers. His stage presence was incredible for a young rapper who just recently came onto the scene. Half way through the song I was screaming every single word to the song. Even though this was my first time listening to his music he instantly gained a new fan. He doesn’t have lots of songs out but the crowd knew every single word to them all. Even when he played his latest banger “Too Young” (which literally came out like a week before his Mod Club show) the crowd was chanting back the chorus to him. I was having so much fun it didn’t even bother me that the person in front of me accidentally hit me in the face with his man bun. Post Malone capped off the night as he played “White Iverson” one more time for everyone. This was my first full day at Canadian Music Week and I already had one of best nights ever. I didn’t know how the week could get better but it did.

One response to “Travelling the 6 for great music. Concert Review.”